Trivium
In Waves Live Stream from The Hangar, Florida
Sunday, 12 December, 2021 (AEDT)
Supports by: Fit For An Autopsy

Can you believe it’s been ten years since metal icons Trivium released their fifth studio album In Waves? Trivium can’t, not only because they are celebrating it a decade later, but on their Hangar livestream in Florida, they comment between tracks on a recorded video that the album still stands as one of their best sounding. Manage to catch the livestream? Well, we did and we can’t wait to hear In Waves at its 10th birthday party, coming only months after releasing contemporary album In the Court of the Dragon (our review here), and recently Matt Heafy dropped onto our Educate Ebony podcast to chat metal (check it out here).

Even though live shows and touring have started to somewhat normalise globally, it seems like we’ve built livestream into our new normal, to celebrate moments like these, which is probably an effective by-product of the pandemic. Either way, this is how Trivium chose to celebrate.

As with any live show or livestream, the metal titans brought in post-deathcore extraordinaire Fit For An Autopsy to warm up the global couch-sitter crowd. The New Jersey band are literally getting warmed up ahead of their sixth studio record Oh What The Future Holds, dropping in a few weeks (January 14th, 2022). It feels like years since viewing their Sea of Tragic Beasts album launch show online, so let’s see how the heavy hitters go with new singles to show off like ‘Far From Heaven‘, ‘Pandora‘ and ‘In Shadows‘. As Wall of Sound’s resident deathcore connoisseur you can bet the excitement leant more towards the supporting act in this instance.

Opening with their title track Sea of Tragic Beasts, Fit For An Autopsy immediately showed how hungry they were for live music. In what seemed like their studio (or one of), the band appeared in the zone to deliver their well-lit set; packed with fiery tones of red and orange . Frontman Joe Badolato introduced the band’s upcoming record and swung into ‘Far From Heaven‘, which was a deathcore wet-dream after only falling in love with the song recently. Drummer Josean Orta was particularly impressive as he replicated the studio version in a very live and raw setting. Despite not having guitarist Will Putney in the room as he only does studio work with Fit For An Autopsy, it was legendary to witness his impeccable vision during the livestream. Badolato delivered ripping vocals that showed no rustiness or discomfort, which was notable considering how long it’s been between live shows.

After the track Badolato briefly engages with the camera in a stern manner to introduce ‘Warfare’, reverting back to their most recent record. Having not been able to tour the album like they may have planned due to Covid, it was a bit of a treat to hear this explosive single played live; Fit For An Autopsy melted into unison as they blistered through the crusher. Next up was ‘Black Mammoth‘ from The Great Collapse, an absolute stand-out song and record, that continued blowing the minds of fans. The single was delivered with so much energy and confidence, relating to technical complexity. With sheer focus, the band delivered a production-packed rendition, leaving adrenaline pumping through your veins.

To jog your memory In Waves was an eighteen-track record, and received the accolades it did for good reason, it truly is a phenomenal and timeless album, and if you didn’t catch the livestream yourself, you’re about to find out why. At this show, we bared witness to modern-day Trivium who are applying their aged experience to an already-perfect album, perhaps Heafy with a lot more ink. This equation equals an astonishing performance. With the emblematic mushroom cloud album-cover back-drop and bright lights, Trivium immediately take you into the time machine with them.

A recorded video introduces the livestream where the band talk to the household name of a record and the approach they took to writing and recording. As the introduction continued, the ‘Capsizing the Sea‘ backing track picked up in volume, until the video ceased and let the livestream take over the screen with modern day Trivium packing a punch into the album title track. With a freshly shaved head and wearing a simple black singlet, vocalist Matt Heafy embodied his most classic and genuine self. The rest of the band appeared warmed up and ready to head-bang through In Waves which they had clearly been rehearsing, because it all came together marvellously.

Trivium were not here to f*ck spiders, and roared into ‘Inception of the End‘, as they did across their set, with little interaction between songs, but it worked better than the crowd engagement approach, because it was an album-playthrough. The performance was a perfect combination of track sequencing with live nuances that brought it all to life, made it human and live.

‘Dusk Dismantled‘ and ‘Watch the World Burn‘ showed no tiredness from any of the band, who were ready for a marathon to display for global fans. Heafy effortlessly strummed his guitar while the rest of the band took care of the more technical sounds, ripping their fingers across their axes. The set developed with mid-album songs like ‘Black‘ and ‘Built to Fall‘ where Heafy showed the same excitement in his vocal delivery than he did a decade ago, except now with more refinement – this could be said for all of Trivium in all honesty.

Having not consciously listened to In Waves in full recently, it was a refreshing and nostalgic pathway through the remarkable record, especially when hearing some deeper cuts like ‘Caustic Are the Ties That Bind‘ and ‘Forsaken Not the Dream‘. Tracks like ‘Chaos Reigns‘ enabled the 1080p witnessing of Heafy effortless opening his mouth and pouring out the chorus lyrics as Corey Beaulieu shredded and supported with backing vocals. During the lesser-deep cuts like these, it was mesmerising to see both Heafy and Paolo Gregoletto headbang in unison as they focussed on the shredding at hand; you could tell the passion is just as strong, if not stronger than ever before.

Closing with ‘Of All These Yesterdays‘ the almighty Trivium gave it their all once-last time for this livestream, and showed huge promise for their next one coming up soon.

Fit For An Autopsy Setlist

Trivium’s The Hangar In Waves Setlist

1. Capsizing the Sea
2. In Waves
3. Inception of the End
4. Dusk Dismantled
5. Watch the World Burn
6. Black
7. A Skyline’s Severance
8. Built to Fall
9. Caustic Are the Ties That Bind
10. Forsaken Not the Dream
11. Chaos Reigns
12. Of All These Yesterdays
13. Leaving This World Behind

Want to tune in to Trivium‘s second livestream next week?
The Deadmen & Dragons show is coming up to get your tickets here. 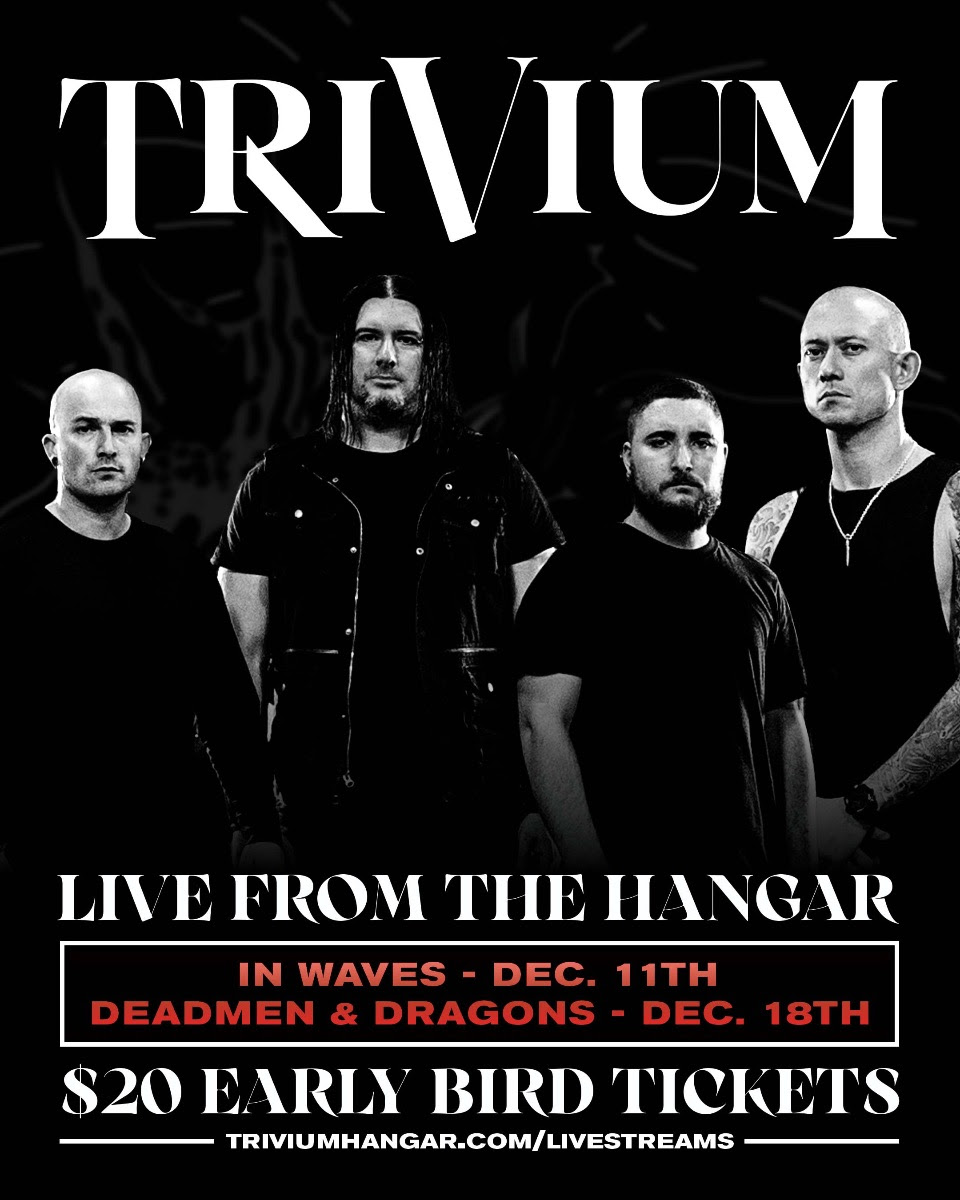