US metalcore outfit Wage War have been ever so busy since they visited us earlier this year (that Polaris tour feels like a lifetime ago now though!). And as frontman Cody Quistad told us backstage in Brisbane, the boys were already working on new material before COVID hit.

Overnight, we got to hear our first taste of their HEAVY AF new offering called ‘Surrounded‘ and it’s going to catch a few naysayers off guard whilst inducing some lounge room moshing with all those breakdowns and bellowing screams. The cleans are minimal and there’s lots of riffage and plenty of djent to fulfil your needs.

HOWEVER, it’s been revealed to be a B-Side from their 2015 album Blueprints according to a tweet from the band and the artwork matches that of the album 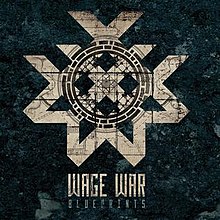 All fans need to know is that it’s heavier in comparison to their last album Pressure (our review here) and this could be the start of the band returning to those heavy roots from 5 years ago… Either way, it’s a good start for Wage War‘s next era! We’ll keep you posted if more on this comes to light…