Finally some good news down South. While the rest of us have been sitting at home, eating and/or drinking too much, complaining about the pub being shut, missing gigs and being largely unproductive for the first half of this less than average year (and lets face it, the second half will most likely follow suit), Melbourne’s Private Function have been working on their second full length album.

Who’s Line Is It Anyway is not reinventing the wheel, nor is it really a heap different to any of Private Function’s previous releases. That’s not to say there is anything to complain about. They have a formula that works and it works bloody well. This album is a chaotic combination of pub rock infused punk. It is distinctly Australian and very much tongue in cheek.

The first two tracks on the album have already been released with videos that are well worth checking out, especially if you have an appreciation for VIC/NSW border towns, and are not a fan of people who move to Melbourne from Perth bringing with them their questionable tastes.

As with the first songs, the rest of the album is hard, wild and intended for playback at ear damaging levels. With 13 tracks on the album, it only comes in at about half an hour from end to end which leaves you hanging on for what they will bring out next by the time ‘Grabbing My Butt comes’ around.

It’s hard to pick a favourite song on this release. It’s just a solid album with not a single track I’d skip, even on the fourth or fifth spin. But if I had to pick a couple of standouts on this album, they would definitely be ‘Stop Liking What I Don’t Like’, which is a lot more laid back in intensity than we’ve come to be used to with Private Function. It’s quite different from the rest of the album in terms of tempo, but with the same lyrical content. The other would be  ‘Are You Gonna Go My Way’ which is a cover/upgrade that’s like if Lenny Kravitz didn’t suck but also was on bath salts. 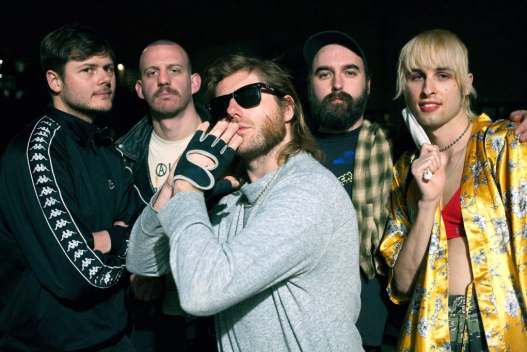 Overall this album doesn’t stray too far from the path that Private Function have forged for themselves over the past few years. Why would it though? They play balls to the wall rock and roll that’s blisteringly fast, loud, somewhat over the top and aggressive but with a sense of unconventional humour. I for one am all for that.

Who’s Line Is It Anyway tracklisting:

Rating: 8/10
Who’s Line Is It Anyway is out this Friday through Damaged Records. Pre-order here
Review By Sean Fabre-Simmonds (@gravy_havock)