Something in the air? Something to do with the moon cycle? We don’t know, but what we do know is that Perth has been treated to the most stellar rock/metal shows in the last week and it’s all a little bit overwhelming. Just your casual first ever Perth stop for death metal giants Cattle Decapitation on your Monday night, no biggie… well it was a biggie and the crowd numbers were there to prove it.

Moderately new Perth venue Tetsuo hosted the Destroy All Lines event, a tour leg that was only announced quite some time after the initial Australian tour was released. Fans didn’t muck about in terms of arrival, so locals Dead Currency had a decent sized crowd to play to, which was cool. The Perth band delivered a crusty death metal set with a hopeful future in the death metal sphere; great to see death metal bands emerging in the West, we can never have too many of those.

Up next were Unravel who provided an intense set to punters, filled with a hardcore thrash death metal fusion. Raspy squealing vocal features appeared amidst a base of gruelling exhale growls, creating speedbumps of chaos across the venue. A decent couple hundred of people had easily entered the venue to catch these guys. The front-man characterised somewhat of a Kerry King vibe, banging his head ferociously throughout the set.

We can really appreciate a four-band set for gigs like this, particularly when there aren’t that many death metal gigs spread out across the year, so it was cool to have a third local and relevant band hit the stage. This time it was Earth Rot who need no introduction. Unless you’ve been living under a rock in Perth for the last few years, you’d know these guys have been maturing and evolving their sound and have reached impressive heights, given their performance. Earth Rot delivered a sharp and well-seasoned death metal sound to a huge crowd. Complemented by military drum beats, and cookie monster growls, the band certainly stood out. Punters were screaming for more between tracks and were starting to get the circle pits moving.

Finally, from sunny San Diego a not so sunny-band entered the stage. Cattle Decapitation received a huge reception from fans who have simply been waiting too long to see the death metal maestros. After reading my colleague Kaydan Howison’s review of the Queensland gig, I was keen to understand his stampede analogy, and it didn’t take more than a few seconds to have that ‘ah-ha’ moment. Tetsuo became alive, as the drums and riffs reverberated into a menacing energy across the venue.

Front-man Travis Ryan exhaled animalistic vocals as the band roared through bangers from the band’s back catalogue. It’s truly special when outsiders would consider each and every death metal song to sound the same, but for diehard and intelligent fans like these, all it takes is the opening notes of each track for punters to go mental, immediately identifying it. Ryan’s vocals transcended between growling death madness to high-pitched shrieks, carrying out the diversity and variety of the band’s capabilities; it’s elements like these that make Cattle Decapitation stand out from the rest.

The vocalist took a moment to thank Perth for having them and admitted they thought it wasn’t right when they saw Perth left out once again from the touring schedule. It was very clear that the band were happy to finally be there, and the fans stoked to have them around.

Cattle Decapitation continued to flourish through their set as crowd-surfers floated from left to right and front to back, devil-horns perpetuated across the venue and heavy metal was very much alive and breathing.

Review and Photo Gallery by Denis Radacic (@denocide). Please credit Den Rad and Wall of Sound if you reuse. 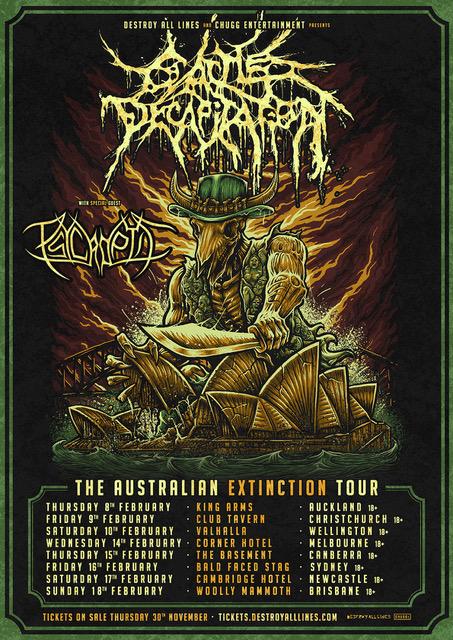